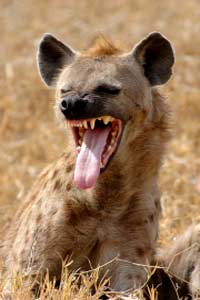 Image via How Stuff Works? A Discovery Company

Type ‘Coping With’ into Google and revel at the hits you get. Everything from death to math anxiety, people have expressed (or experienced) a need great enough that someone sat down to write out techniques to deal with it. Problems and bad times and hard luck and desperation and loss seem to circle life, waiting for a weakness to show; waiting for a too long a pause at a juncture; waiting for the opportune moment to strike. Opportune for them of course. Never for us. And never one at a time.

Why is it that one thing can’t go wrong at a time? Hmm? I liken bad things to a pack of hyenas. One finds you, alone in the wilderness of life. It starts to giggle and inches closer. You see it coming and your hackles rise and you are pretty sure you can deal with this. It’s just one right? But the giggling turns frenzied. It’s calling to its friends. A buddy from the bad stuff pack joins in. Then another. Before you know it you are surrounded by the infernal, ugly, tough luck times…and they won’t stop that incessant giggling.

Well, I’ve my own pack of hyenas, as does everyone else. In my tiny little world I think I have more hyenas than anyone else. Plus my hyenas are bigger, more vicious, and uglier. At least that’s how it feels to me when staring down the muzzle of one. (In particular the species Maritus Scindo of the Curia Sempra family) (Ten points if you giggled at that. Twenty if you Googled the words and then giggled.)

Then I type in ‘coping with’. 19,800,000 hits off Google. Nearly 20 million sites to help with warding off hyenas of all types, sizes, and ferocity. There are a variety of coping techniques that vary greatly depending on the person and the situation. I firmly believe that a large stick would pick off at least two of my hyenas but there seem to be laws that frown on this. Conservation, endangered species, protection for the mentally handicapped and what not. Instead I turn to sarcasm and hyperbole, and more importantly writing. Its my coping technique.

Another one I found was to put problems into perspective. If zombies are eating the guy fifty feet away, you might be willing to admit your hyenas aren’t quite so terrifying. So, naturally I checked the Yahoo! News Feed, and this is what I’ve found.

Maria Shriver must deal with a public and humiliating divorce after her husband, The Former Gubernator, admits to having fathered a child and keeping it from her.

Residents of Talkalakh, Syria are fleeing their homes and livelihoods. One man describes walking down the streets where one can smell the dead bodies.

Bethanny Frankel is being sued for $100 million dollars by her ex-managers. Not that she can’t handle that what with SkinnyGirl Cocktails and stupidly successful reality shows. But still, $100 million dollars. That’s $100,000,000 with all its zeros attached.

Maybe my hyenas aren’t so big.